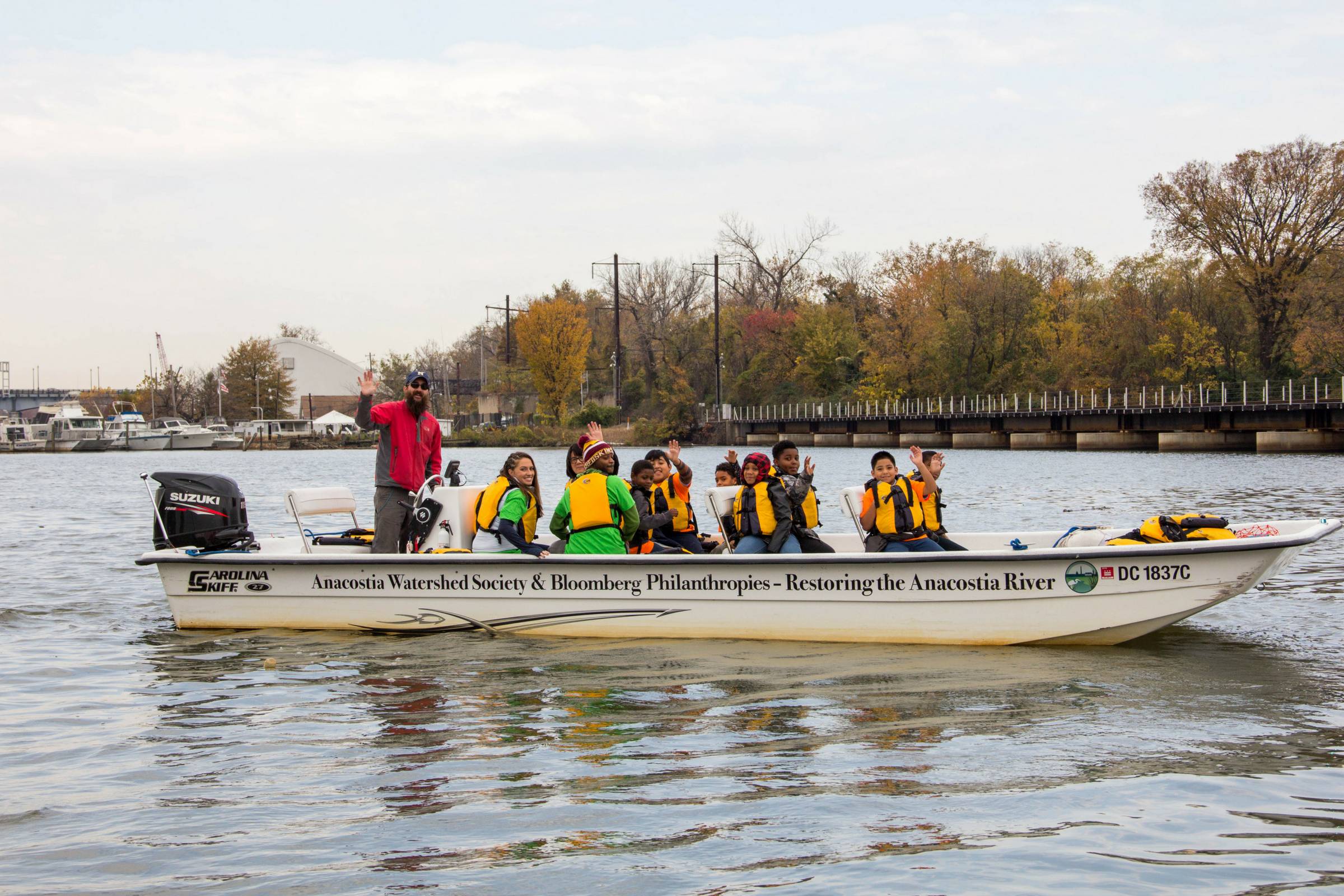 The Anacostia Watershed Society was founded in 1989 by a small group of concerned individuals who decided that the environmental needs of the Anacostia River and its watershed communities required serious attention. Over the past 20 years, our staff and programming efforts have expanded significantly to encompass efforts in environmental education, stewardship, and recreation, as well as engaging the community through public affairs. We are making a difference and we hope you'll help!

AWS is a nonprofit organization whose mission is to protect and restore the Anacostia River by bringing partners and communities together to achieve a clean and safe Anacostia River for the benefit of all living in its watershed and for future generations.

The vision is to make the Anacostia River and its tributaries swimmable and fishable, in keeping with the Clean Water Act, for the health and enjoyment of everyone in the community. Community involvement is critical to achieving this vision and AWS seeks win-win solutions through strong partnerships and coalitions, with all parts of the community, government, and other stakeholders. Core to our work is reaching out to, educating and engaging the next generation of decision-makers, our youth.

What Does It Take to Clean a River?

The State of the River on the 25th Animages/attachments/AWS_25th_Anniversary_State_of_the_River_Report-FINAL.pdfniversary of the Anacostia Watershed Society

The organization’s grassroots organizing efforts have created an enlightened community of citizen stakeholders who are aware of their connection to the natural world and who work to promote environmental and social healing throughout the Washington, D.C. metropolitan area. AWS’s work in urban and suburban school systems has contributed much to the development of an informed and empowered generation of young people.

AWS, the first organization to target the protection and restoration of the Anacostia River, was incorporated in 1989 with Robert Boone as its President. Jim Connolly, Executive Director, was brought on in 1992. James Foster succeeded Boone as President in 2009; however, Boone remains as Board Chair until 2010.

The organization has seen rapid growth since 2000. Similarly, AWS’s budget has experienced a similar trajectory. Funding is primarily from government and foundations (40% and 43% respectively,) with corporate and individuals providing only a small component of overall funding. The organization holds significant other assets including: the George Washington House, which is under renovation, and numerous boats and other equipment.

The governing manifesto (“Clean the Water, Recover the Shores, and Honor the Heritage”) was written in 1991 and continues to guide the organization today. The early years focused on bringing attention to the health of the Anacostia River which, by the late 1980s, many experts and scientists began to recognize as one of the most polluted waterways in the United States. The early logo of “STOP” (Stop Trashing the Anacostia Today) pointed to the problem and the need to take action. From the beginning, river clean-ups, tree-planting, community information and slide shows, and advocacy to protect greenspace and stop or limit development that would negatively impact the river were central to the work of the organization. For example, AWS successfully led a campaign to stop the construction of Cooke Stadium and a new bridge at the Barney Circle Freeway, and collaborated with other groups to reach an agreement with the US Navy Yard to remove contaminated sediment and install stormwater controls on its sewers. Clean-ups included trash removal, storm drain stenciling, and other activities, while restoration focused primarily on tree planting. The first regional Earth Day clean-up was held in 1995, when volunteers removed over 8 tons of trash.

In addition, recreation played a key role in getting people to interact with and around the river, where they had previously ignored or even avoided it. The canoe fleet was donated in 1993 and the annual Paddlesport Regatta began in 1994. The “Paddle to the Bay” began in 1996. In addition to advocating for increased greenspace within the watershed, AWS worked with communities and government agencies to expand bicycle trail connections.

After 10 years, attention to the plight of the Anacostia River and watershed communities was increasing and more people were getting out on the river, and the organization recognized the need to not only say “no” to the problems of the river, but also promote solutions and alternatives. Reflecting this change in priorities, AWS shifted from the red “STOP” logo, to the green “START” (Start the Anacostia Restoration Today) logo in 1999. Central to this new focus was the development of the Environmental Education Program, particularly for young people east of the river, with the first significant curriculum, Watershed Explorers, developed in 2001.

Now, several years later, the environmental education program has expanded to include curriculum in five core areas and a teacher training program. The restoration program has grown to include invasive removal and wetlands restoration, in addition to tree planting, and the advocacy program has been expanded by the addition of new issues and a water quality monitoring component. While the recreation program continues, particularly the river tours and paddling clinics, it is more integrated with the Environmental Education Program.

In 2009, AWS chose to represent the rapid expansion of its environmental education and restoration (now collectively referred to as stewardship) activities by creating a new, forward-looking logo and image for the organization. This effort included updates to many of its informational resources, including this Web site, first launched in the fall of 2009. With this renewed commitment to the local environment and your continuing support, AWS’s next 20 years of service on the river looks hopeful and bright.

Published in About Us
Downloads:

Board of Directors
Keep in the Loop
Get the Latest updates on our work delivered to your inbox.
Subscribe Now