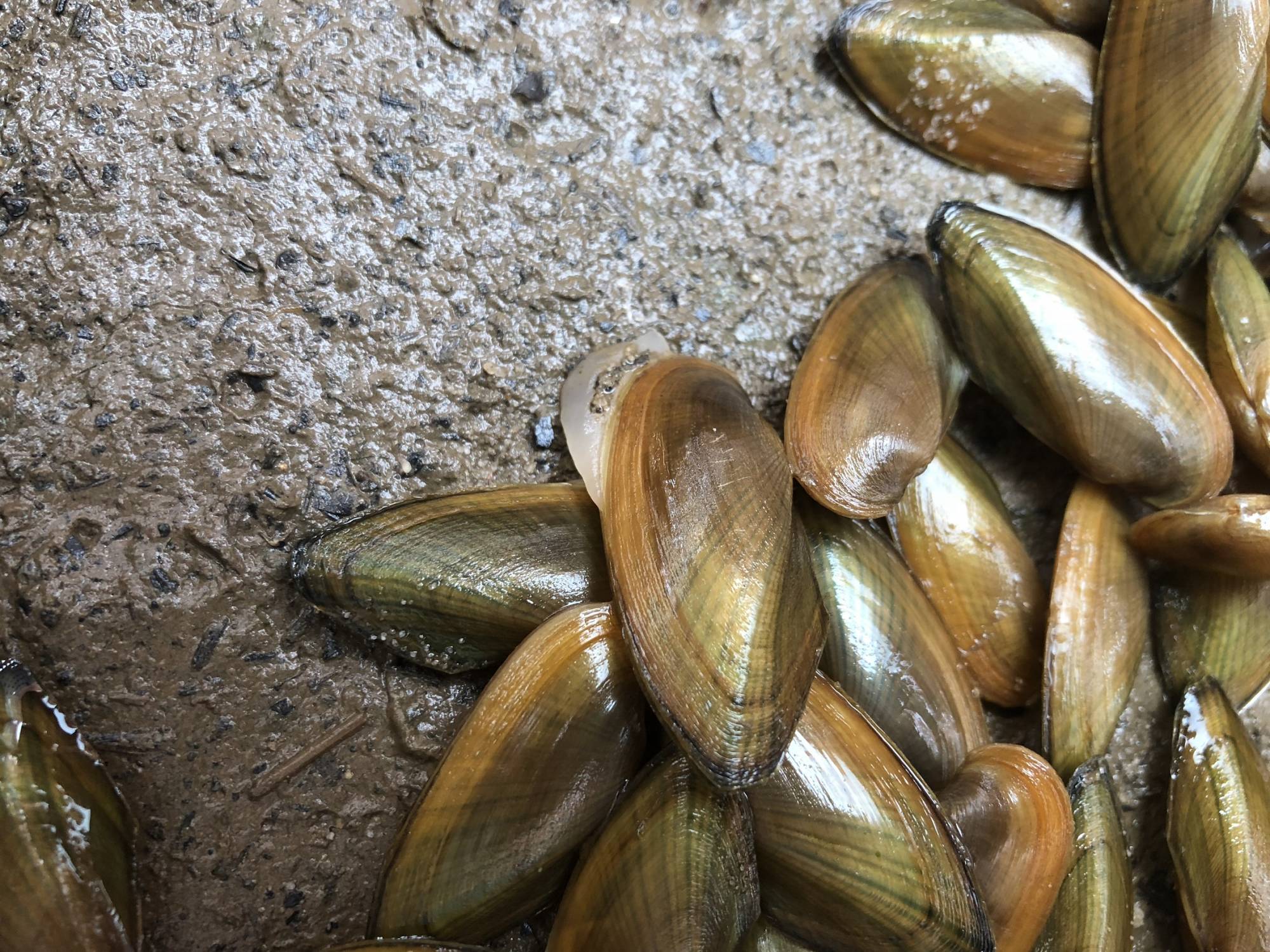 Eastern pondmussels fresh from the hatchery in August (2018) and ready for their new home in the Anacostia River. Note the light-colored foot of the mussel in the middle, they use that foot to crawl and to bury themselves into the substrate.
December 5, 2018 by: Jorge Bogantes

The tidal hydrology of the main stem of the Anacostia River, as well as its location in the lower part of the watershed, have been historically a curse when it comes to sediment, trash and pollutants. At our current juncture of improvement in some water quality conditions, plus the fact that we are culturing water-column-filter-feeding mussels, these are actually very interesting conditions to have. This means the tidal main stem of the river has a lot of nutrients for our mussels to grow! tons of plankton, detritus and bacteria (yes, including E. coli!), it's all fair game for these little guys. Mortality has actually been very low, which means there's no dangerous concentrations of nasty pollutants so far during the first 3 months of deployment in the river. The cumulative mortality for these first 3 months has been of only 199 mussels (3%), out of 5,850 mussels. That's pretty low! The majority of those dead mussels were from the pond at Keliworth Aquatic Gardens (KAG). On our previous blog post we discussed the reasons of this high mortality rate, pretty much because of the low levels of dissolved oxygen in the water due to the metabolic activity of the submerged aquatic vegetation. 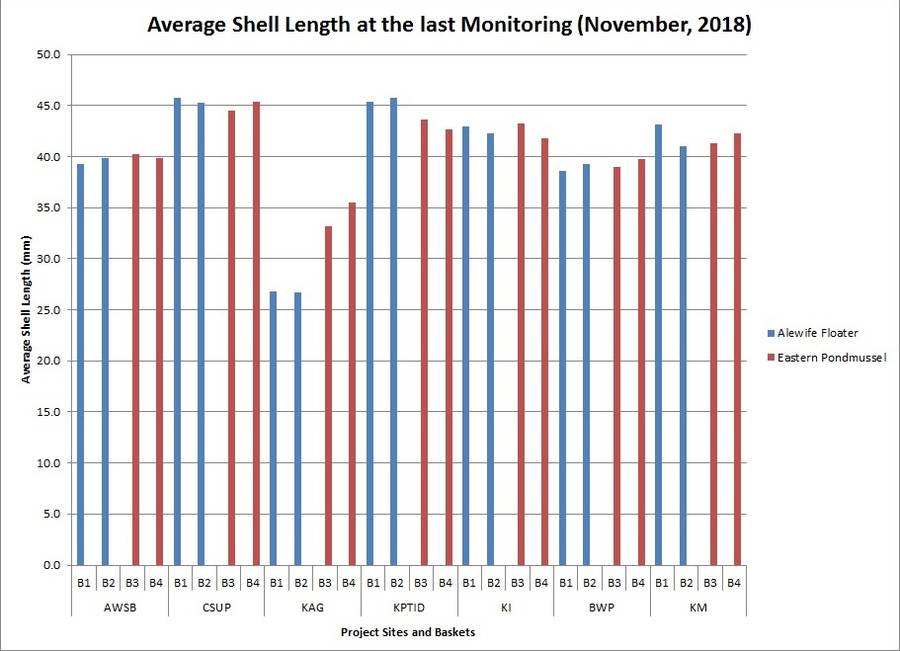 This chart shows the average shell length (in millimeters) for every single floating basket at the last monitoring session in November (2018). These are 28 floating baskets.

By the way, the sites are:

Most of our mussels are well over an inch (30 mm) in shell length, the only exception is, again, our site at KAG due to the low oxygen conditions. Also, you would expect higher food availability in the tidal river versus the ponds at KAG, the river gets way more nutrient input from basically all over the watershed. When they came from the hatchery in August, the alewife floaters where in the 20's mm range which is about three fourths of an inch in shell length. The eastern pondmussels where actually longer, in the 30's (mm), a little over one inch, but this is due to their natural shape, more lance-shaped than the alewife floaters which are more elliptical/round-ish. You should remember that just in April when these mussels were babies (both species), they were about the size of a grain of sand! Kenilworth tidal and Capital SUP have been the top sites in terms of shell length. But, as you can see, the rest of the tidal sites have shown pretty decent growth at or around the 40 mm mark (1.5 inches).

The average shell length increase in percentages shows a similar picture but with some important differences. The alewife floaters are growing faster than the eastern pondmussels, this is due to the natural growth rate of the species. At AWSB (the barges) and BWP (Bladensburg Waterfront Park) the pondmussels also showed some shy growth (?!). During the mussel monitoring we also do water quality monitoring. We noticed that conductivity increased a little bit from August to October at both sites but still within the normal levels --below 329 micro Siemens. This happens during and after rains when floodwaters bring nutrients and particles that change the chemistry of the water. At the barges, we also saw a dip in the dissolved oxygen levels from 3.26 mg/L in August, to 2.36 mg/L in October, this could have caused some stress in the mussels resulting in less growth. Although it is hard to know the precise reasons of this slightly reduced growth. Mortality was very low at both sites, BWP only saw 2 dead mussels and the barges had no dead mussels at all. 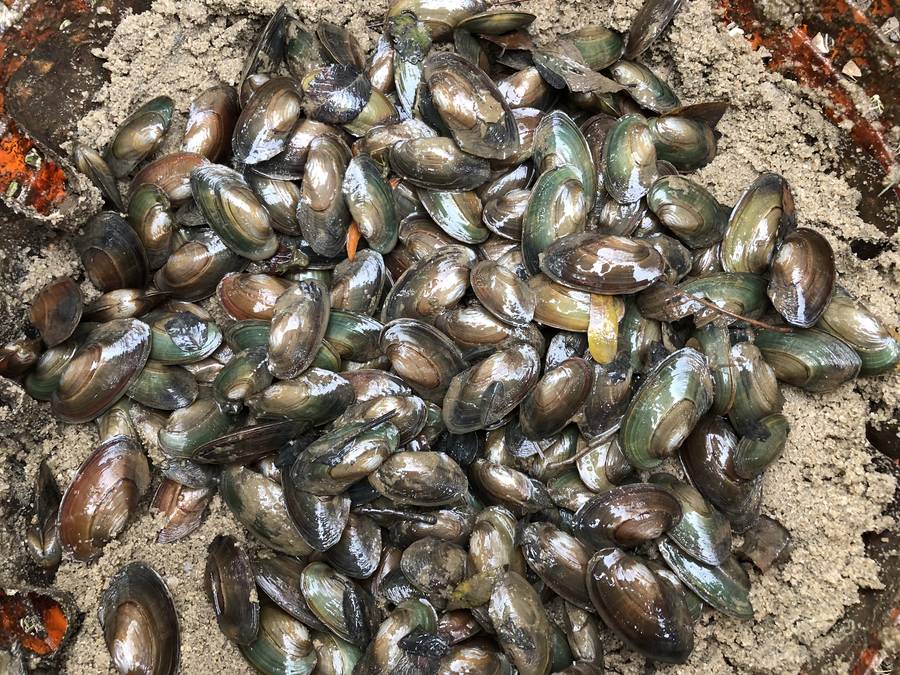 A basket with nice specimens of alewife floaters from Capital SUP showing a beautiful green new growth shell coloration. If you look at the individuals with the nice green coloration, when they came from the hatchery in August, they were the same size and color of the inner brown shell with the pale speck on the beak (yes, we don't know why they call that a beak, but they do?!) you can see in these specimens. The green hue area shows the new growth during the project from August to November. 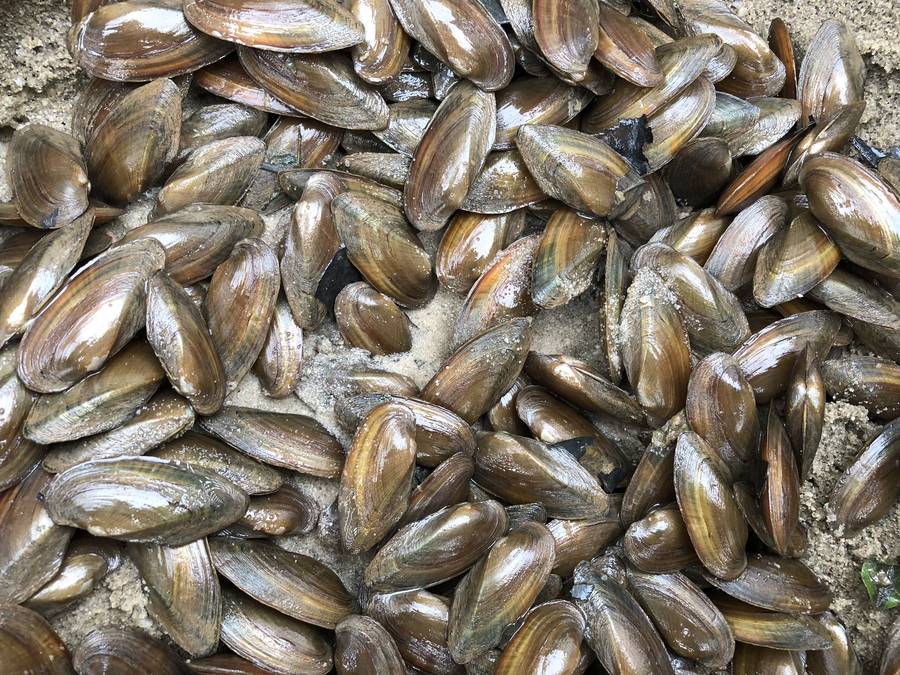 These healthy pondmussels came from Kenilworth tidal (KPTID) a site where mussels showed some of the best growth, look at those green rays!

Regarding the eastern lampmussels we don't have good data to compare yet given that we "adopted" them later and were measured only during the last two monitoring sessions. Right now the mussels are overwintering at one of the ponds at KAG, which we will talk more about at another blog post, in the meantime we are hopeful that next year will be as successful as this year was.

back to top
More in this category: « First Master Naturalist Class A Success! Anacostia River Mussel Power: Into the Classroom! »
Keep in the Loop
Get the Latest updates on our work delivered to your inbox.
Subscribe Now