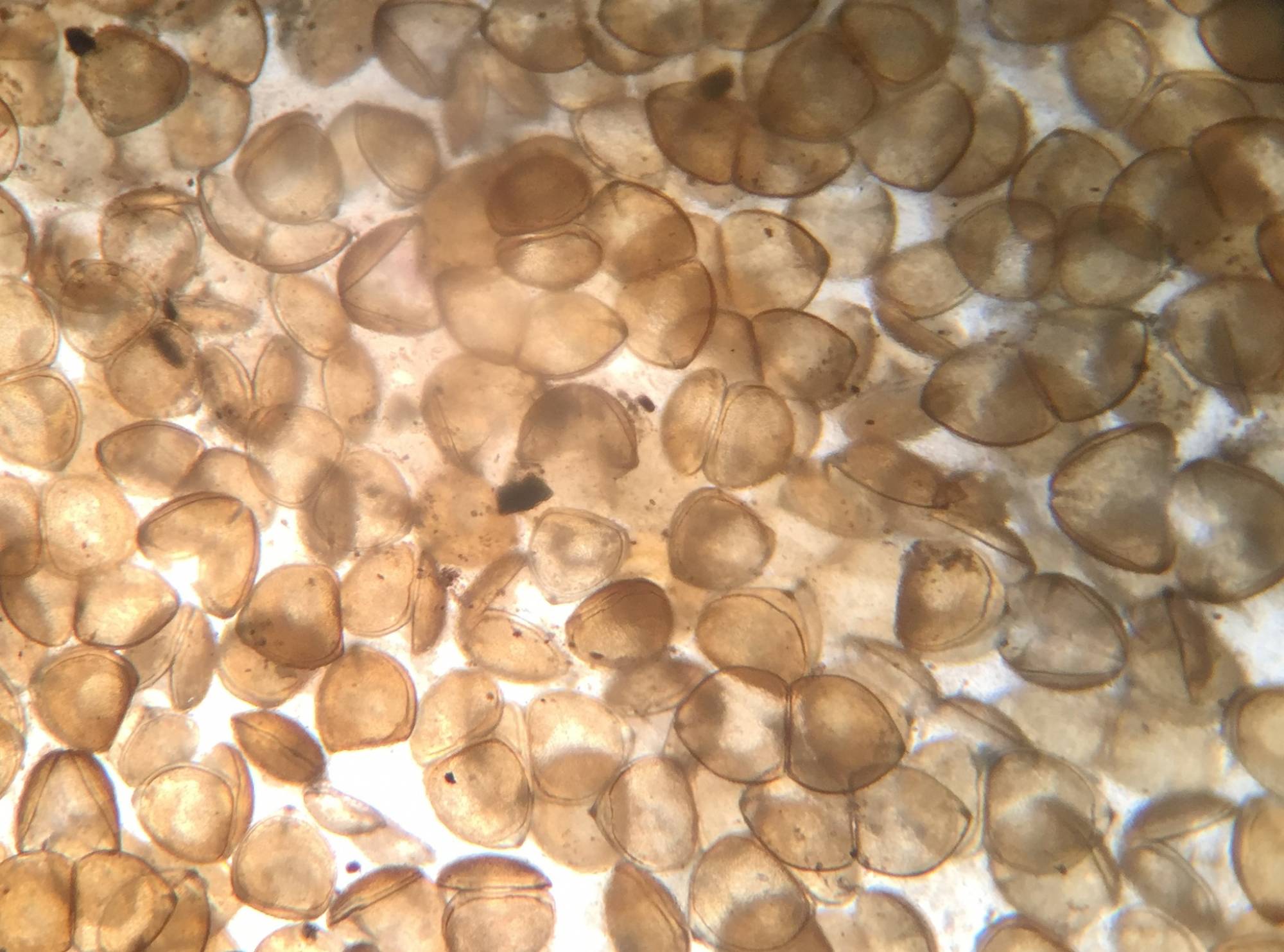 Our freshwater mussel restoration project is up to a great start! We will tell the story on a series of blog posts, so, stay tuned! On August 21st (2018) we went to the Harrison Lake National Fish Hatchery in Charles City, VA, to pick up our juvenile mussels. The hatchery is run by the U.S. Fish and Wildlife Sevice and is the biggest freshwater mussel hatchery in the Mid-Atlantic/southeastern area. Without their meticulous technical work, it would have been impossible for us to embark on this exciting project. So, kudos to Rachel Mair and her dedicated team of mussel biologists at the hatchery! On the way back from the hatchery we dropped off 3,000 surplus mussels we donated to the Maryland Department of Natural Resources and their budding state mussel hacthery in Brandywine, MD. The next day was the big day, we deployed 5,600 mussels in 28 floating fish baskets at 7 sites throughout the river. At each site we paired the baskets by species, 2 baskets of Eastern pondmussels and 2 baskets of Alewife floaters. Some surplus mussels stayed at our small pond at the George Washington House and later had to be moved to one of our sites at Bladensburg Waterfront Park because oxygen conditions became too low in the little pond.

The mussel deployment was featured in the news by WJLA: https://wjla.com/news/local/cleaning-up-anacostia-river-mussels as well as other media outlets.

Here's a map of the project sites: 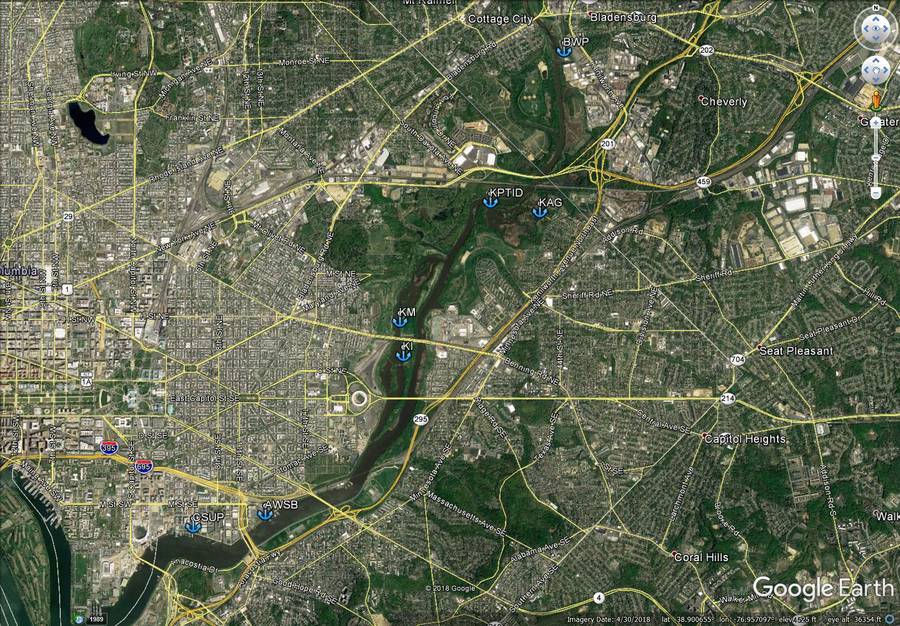 These are our 7 project sites in the Anacostia River, all are in DC except for our site at Bladensburg Waterfront Park. One site was later added with more surplus mussels in the southeastern part of Heritage Island in northeast DC.

The 5,600 young mussels used in this project, produced at the hatchery, include 2,800 Alewife floaters (Utterbackiana implicata) and 2,800 Eastern pondmussels (Ligumia nasuta). In theory, as they grow, they will filter 10-20 gallons a day. At 10 gallons a day, they would filter about 30 Olympic swimming pools in a year! 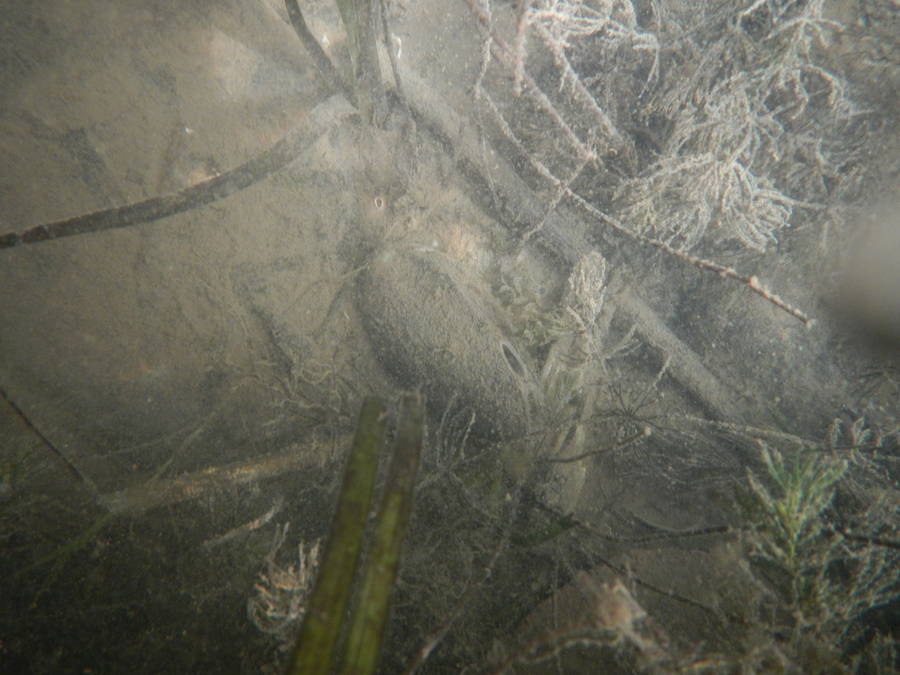 During the day of deployment, we had to count and divide the bivalve stock for the 7 different project sites. And then right before deployment, we measured a sample of 20 mussels per basket, we measured shell leghth, height and depth for each mussel in the sample, that's what we will do each month (except during the winter). 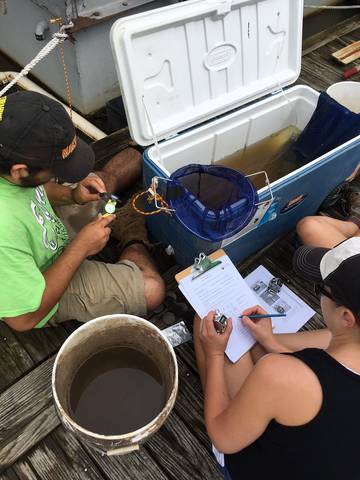 Our staff, interns and volunteers measuring mussels right before deployment at our floating office in DC. 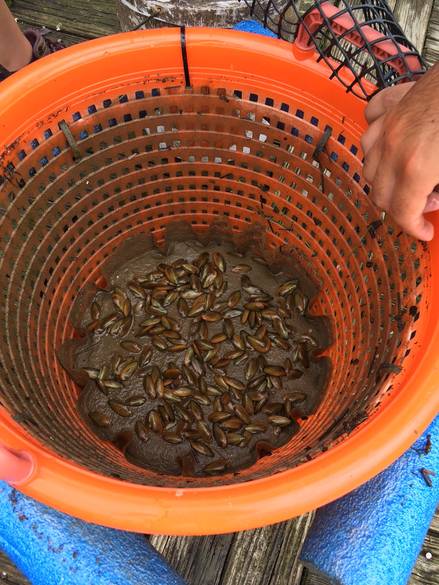 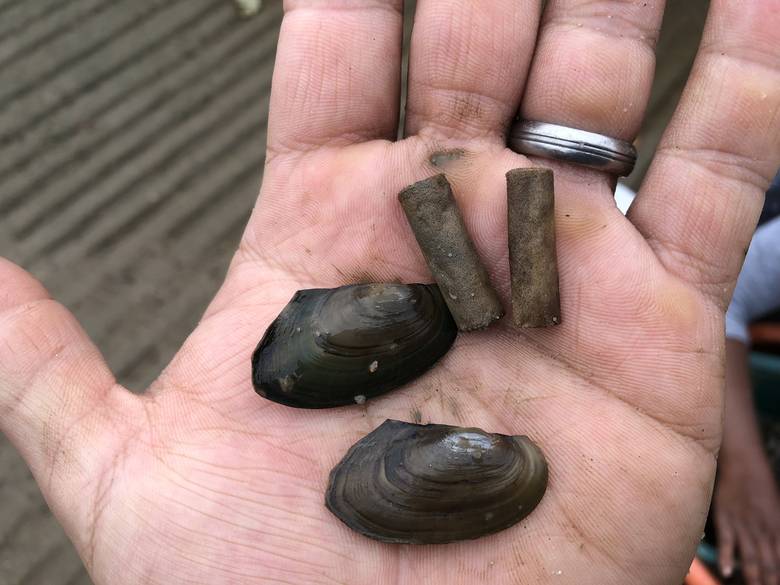 Juvenile Alewife floaters and a couple of cigarrette butts we found inside the baskets during the second post-deployment monitoring session.

Stay tuned as we tell our #musselpower (yes, that's the hashtag!) story in a series of blog posts.

back to top
More in this category: « Applications Open Now for Spring & Summer Adult Education Programs! Storm Drain Murals of 2017 »
Keep in the Loop
Get the Latest updates on our work delivered to your inbox.
Subscribe Now