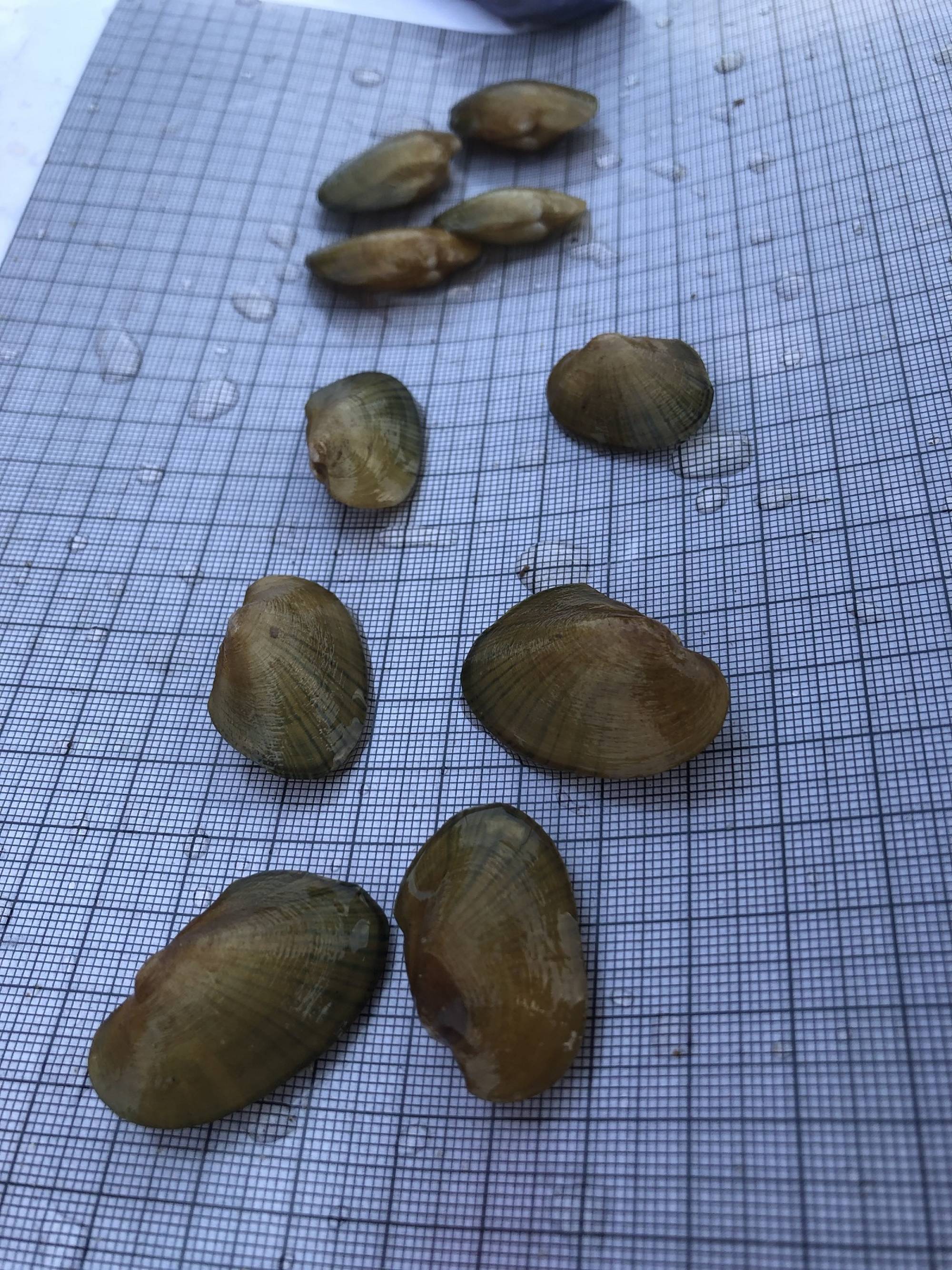 About a week after we deployed our original stock of two mussel species in August (2018), we were lucky to add a new species to our mussel stock, the Eastern Lampmussel (Lampsilis radiata).  We adopted 250 eastern lampmussels donated by the U.S. Fish and Wildlife Service’s (USFWS) Chesapeake Bay Field Office. Dr. Fred Pinkney (USFWS) led a research project in the Anacostia River where he deployed lampmussels at 10 sites (1 site was in the Potomac River) to see the mussels survival and growth. The mussels were placed in floating baskets (smaller than the baskets we are using) and submerged silos, which are small heavy duty concrete cages placed on the river’s bed.  The mussels used for this study were raised by the Harrison Lake National Fish Hatchery (just like ours) from reproducing adults collected during the fall of 2017 in the Potomac River at Piscataway National Park. These are actually the oldest and biggest mussels we have in our stock. 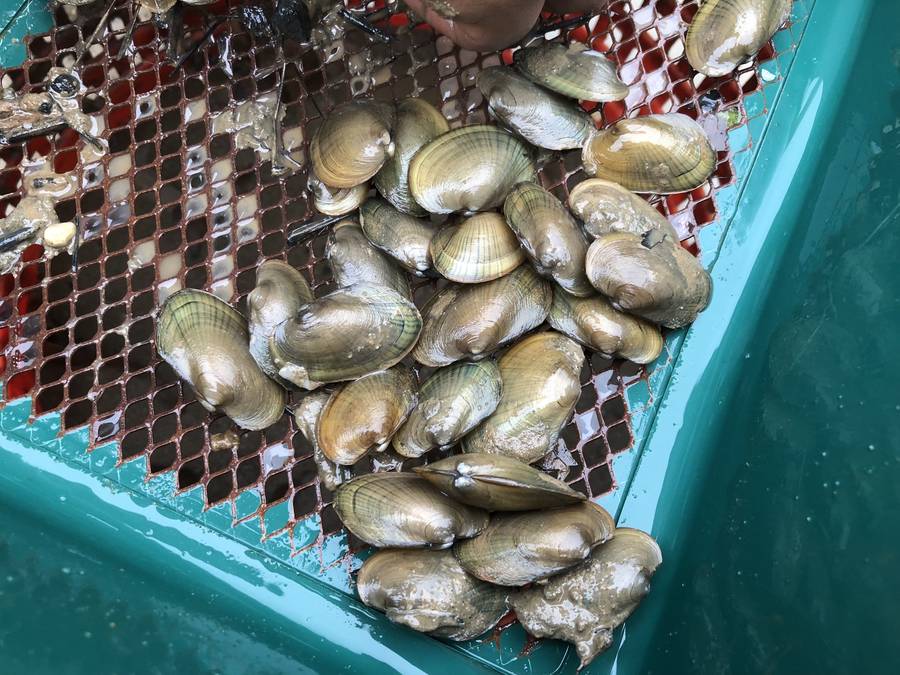 Data from this study hasn’t been published yet, but we do know that, all in all, the mortality was minimal and growth was awesome, pretty much the same pattern we have observed during the first 3 months of our project. An interesting thing to note, is that these lampmussels showed some of the greatest growth rates at the pond at Kenilworth Aquatic Gardens (KAG). It has been the opposite for us at that same site with our alewife floaters and eastern pondmussels, we have observed little growth and the highest mortality rate. Almost all our mortality, 2.5% as of our second monitoring, was from that pond. Why? The pond at KAG as a lot of submerged aquatic vegetation (SAV), almost the entire pond bed is carpeted with SAV. Submerged aquatic plants are known for photosynthesizing during the day with the presence of sunlight, a process that releases oxygen into the water column. At night, respiration goes on intensively, a process that consumes oxygen and releases carbon dioxide. We believe this and the fact that the SAV at the pond was at full growth and then in “overwintering prep” mode in the late summer/early fall, may be the cause of the very low dissolved oxygen levels, even dropping below 1 mg/L, which is a very low figure (above 5 mg/L is great but mussels are fine with 3 mg/L). Our solution has been to put an aquaculture-grade pond aerator which is pretty much a big version of your goldfish tank bubbler. 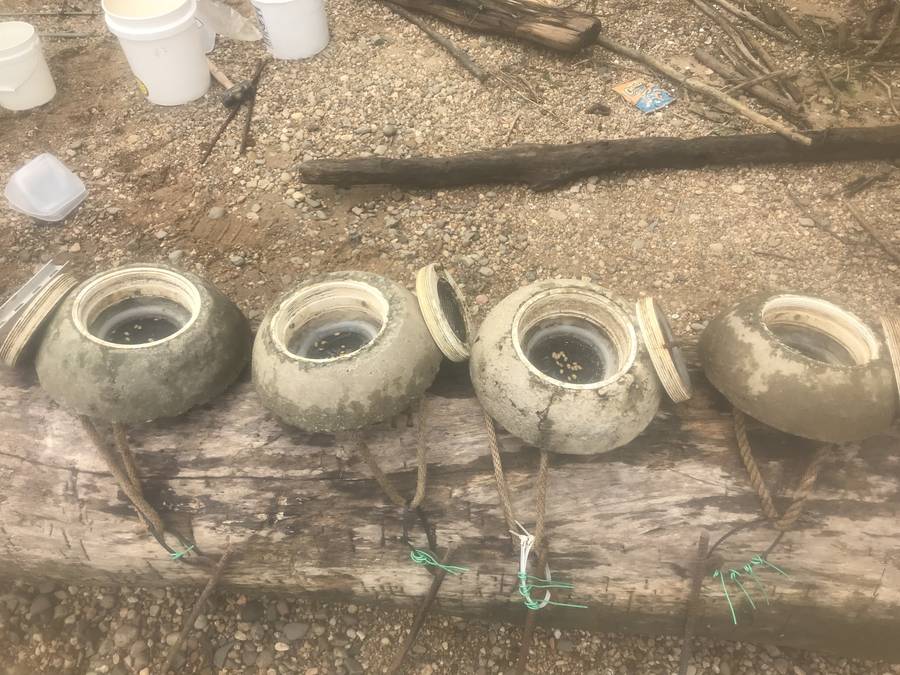 Mussel silos, these heavy duty concrete domes have small mussel chambers inside, they are placed on the river bed. Photo: Fred Pinkney, USFWS.

Lampmussels grow slower than our other two species, at least during their first months of life. When they were brought from the hatchery in June, they were only 10 mm long (0.4 inches) or smaller. Because of their light brown color it was hard to distinguish them from the tiny stones in the sand substrate of the baskets they were in. Data from our last monitoring before overwintering at the KAG pond showed that the biggest lampmussel from the Capital SUP site was 54 mm (2 inches!). 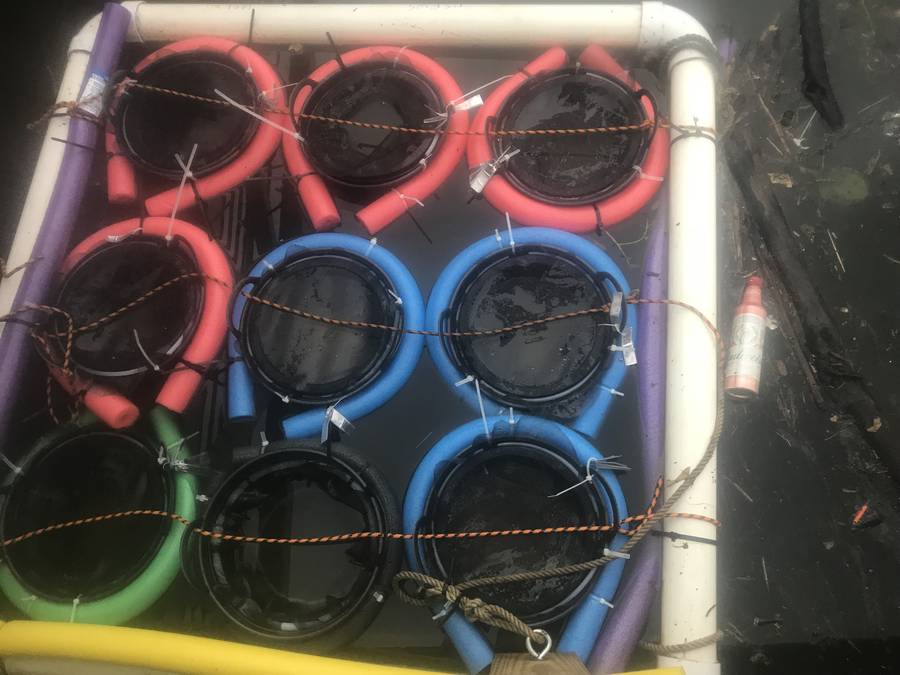 Eastern lampmussels are medium-sized to large mussels, reaching sizes of up to 4 inches in shell length. They have beautiful green-colored rays, hence their Latin name “radiata” meaning radiate lights or beams. They have a variety of fish hosts for reproduction, including rockbass, pumpkinseed, bluegill, smallmouth bass, longear sunfish, largemouth bass, white perch, sand shiner, yellow perch, bluntnose minnow, and black crappie. They are considered long-term brooders with eggs fertilized in mid to late summer and glochidia (larvae) released the following spring. But the most fascinating part is that these mussels show an adaptation to increase the chances of their larvae contacting a suitable host fish. When ready to release their larvae, a gravid (pregnant) female shows a conspicuous modified mantle flap (called the mantle lure). They wiggle the mantle lure, which even has some amazing “faux minnow eyes”. This outstanding adaptation is thought to mimic prey of host fish for the mussel and have been shown to elicit bites by potential hosts like largemouth bass looking for a minnow morsel. For a refresher on the fascinating life cycle of mussels take a look at this great page by the Virginia Tech. 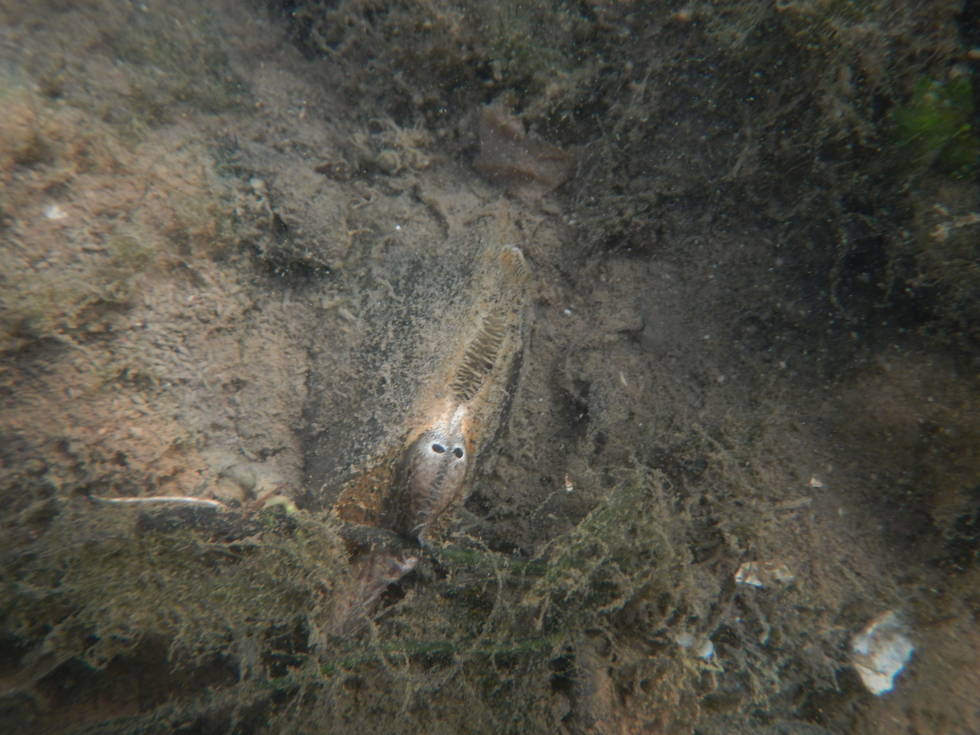 During the fall of 2017 we were lucky to witness a gravid lampmussel female displaying her mantle lure at Buzzard Point in the Anacostia River. The full extent of the mantle is not visible because a twig is blocking it. A host fish, like a Largemouth bass will see the lure and will bite it,  the female will release the glochidia (larvae) which will become attached to the fish's gills like lice in their parasitic life stage.

back to top
More in this category: « Anacostia River Mussel Power: Where do we get our mussels? First Master Naturalist Class A Success! »
Keep in the Loop
Get the Latest updates on our work delivered to your inbox.
Subscribe Now