Anacostia River Mussel Power: Where do we get our mussels? 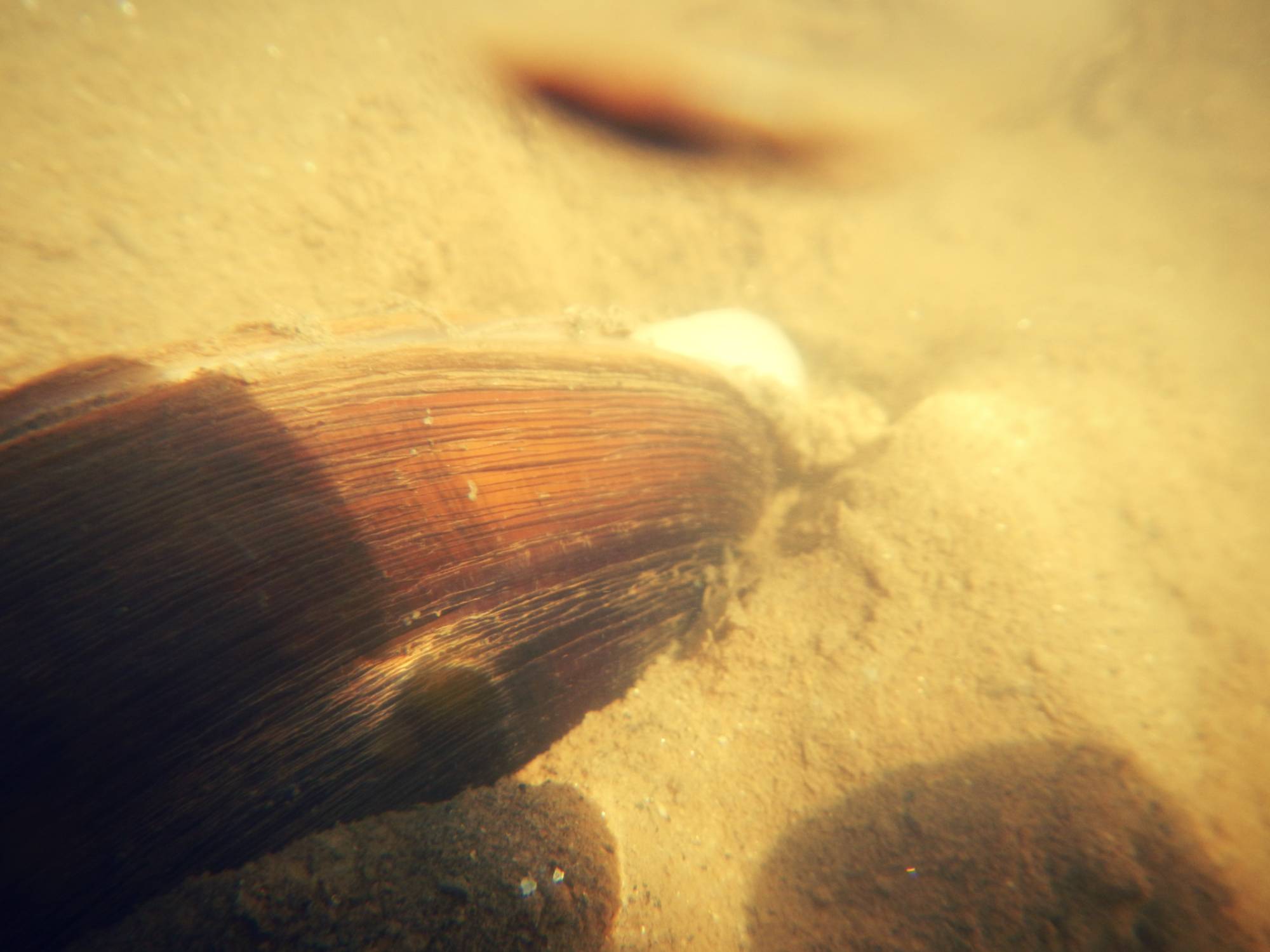 An eastern pondmussel lurks at the river bed at Kingman Lake.
November 13, 2018 by: Jorge Bogantes

First of all, let us give a big shout out to all our great #musselpower sponsors: the DC Rotary Club, the National Fish and Wildlife Foundation, the National Park Service and the Urban Waters Federal Partnership. Not only them, but also all the people who contributed with their donations during the Do More 24 fundraising campaign in the spring. You have made this project a reality, thank you all so much!!

Some of the great media coverage of this project includes an article by Will Parson from The Chesapeake Bay Program (and also an AWS Master Naturalist!), he wrote a nice article on September 19th (2018) about our mussel restoration project, it includes some of his great photos: https://www.chesapeakebay.net/news/blog/boldly_going_where_oysters_cant He also volunteered for the project to help build floating baskets and during deployment on August 22.

At this point you have probably asked: where does AWS gets all their mussels? Like we mentioned in the previous post, the juvenile alewife floaters, eastern lampmussels and eastern pondmussels where produced at the Harrison Lake National Fish Hatchery (HLNFH). But, where do we get our stock from? 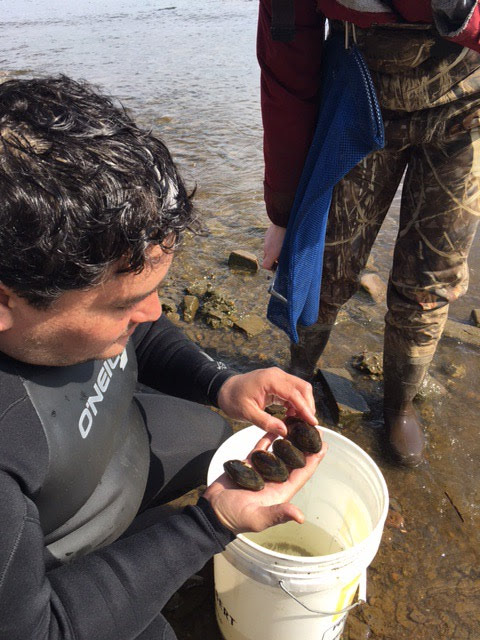 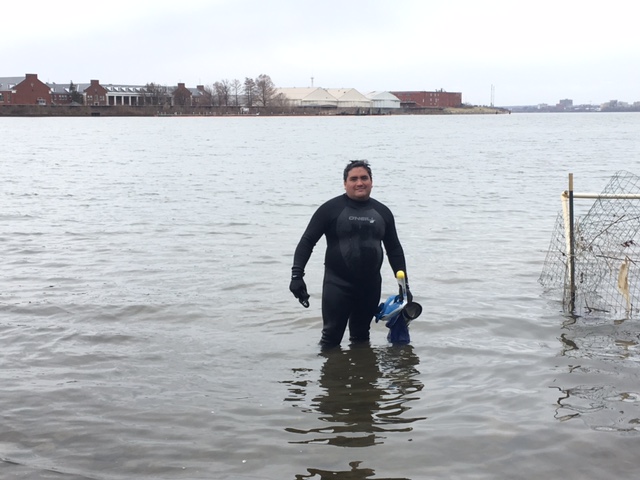 The answer is, in the Anacostia River and the Potomac River. Gravid (pregnant) female mussels used in the hatchery to produce our young mussels where collected from local waters and sent to the HLNFH. These females are known as the broodstock. In the spring of 2018, between March-April, I figured I had one of the best techniques to collect mussel broodstock at our disposal: snorkeling. I'm no scuba diver, but I did have experience snorkeling in the tropical reefs of the Pacific and Caribbean coasts of Costa Rica where I'm from. In my almost 10 years working at AWS, never did I think I would be snorkeling in the Anacostia River. But there I was in 48 degree (Farenheit) waters with a swimsuit looking for mussels on the bed of the Anacostia River. Yes, I thought I was crazy myself!

But I have to say, the experience was actually amazing because it opened a whole new perspective of the river I didn't have, a fully aquatic vista of our beloved river! Unlike what many people think, or have seen, the Anacostia River is not 100% mud bottom, it does have some gravelly beds. And, the aquatic ecosystem at Buzzard Point by the confluence with the Potomac River far excels, in biological diversity that is, its terrestrial counterpart along the riverbanks there. A trip to James Creek Marina or the adjacent shoreline reveals a seemingly ecological desert with old abandoned federal government buildings, construction sites and a sad little swath of riparian trees threatened by a hodgepodge of invasive plants. Submerge in the water and the landscape dramatically changes to thriving submerged aquatic vegetation (SAV) beds, nice gravel bottom, hundreds of mussels, snails, crayfish and fish. I had seen these good stuff by doing mussel surveys with waders and water scopes, but scanning the bottom by snorkeling really gives you a nice view of the aquatic ecosystem. 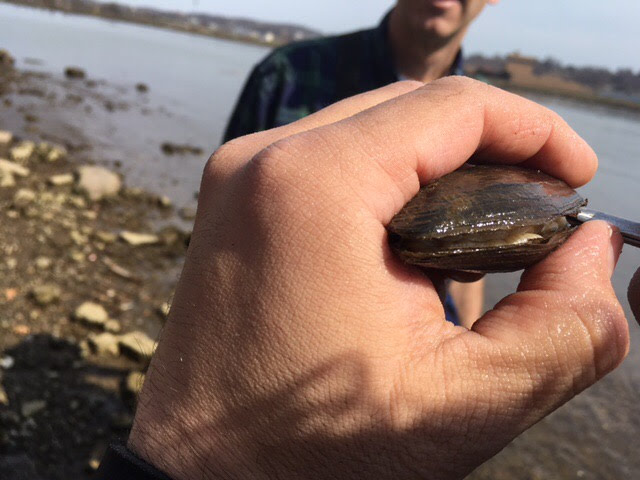 How do we know a female mussel is gravid (pregnant)? We use modified nasal specula to gently pry the female's valves open and take a peek at the gills. The female's gills, which are normally just used for breathing, also become (sort of) her uteri. The gills become pouches for the eggs, which then become larvae, which are known as glochidia. The gills then become swollen with the microscopic PacMan-like larvae. Note the white ribbed surface inside the valves in the picture (to the left) that's the gills full of larvae. The mussel in the picture is a female Eastern pondmussel, we collected a total of 4 female of this species, they all produced a total of 15,000 juveniles. 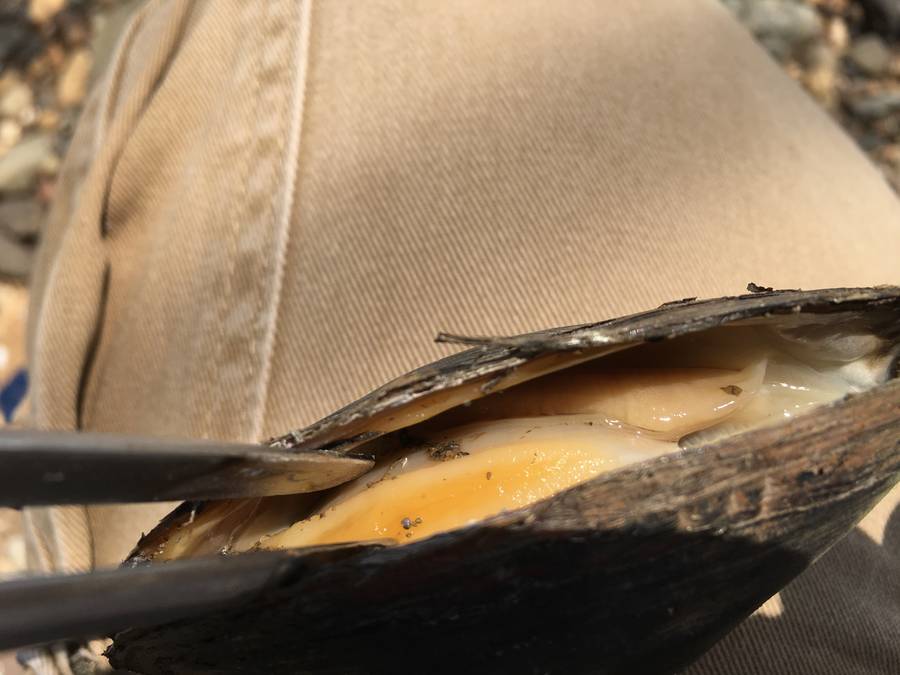 This is a gravid female Alewife floater. In this case the swollen gills, which is the light colored flap on the right, not the yellow surface (that's the foot), are not as evident and we had to sent this picture to the mussel biologists at the HLNFH for confirmation. This single female is the mother of all the alewife floaters we are using at our project. At the beginning she producing a whopping 17,000 juveniles! 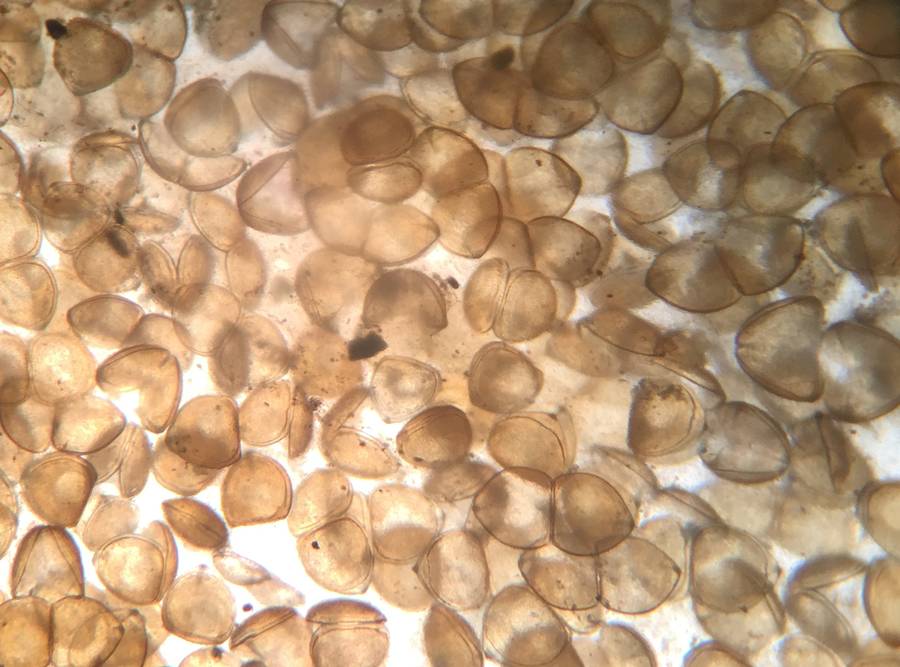 These are glochidia of Alewife floater, these tiny PacMan-like larvae have hooks at the end of each valve that help them attach onto the fishes bodies. In this case the host fishes are American Shad herring and other fish from the shad family.

Once we collected the gravid females, we had to keep them in river water overnight with a bubbler to aerate the water. Not only that, we had to keep the water cold using blocks of pond water ice to prevent the female from releasing her larvae which happens when the water warms up. The next day we had to do the 2.5 hour drive to the HLNFH in Charles City, VA, southeast of Richmond. Once at the hatchery, the females are put in chillers to keep the water cold until their host fish are ready. Then, females are put in tanks with their respective host fishes,Largemouth bass for the eastern pondmussels and herring/Shad for the alewife floaters. They are kept with their host fishes for a couple of weeks. During that time, females release their larvae which cling onto the fishes bodies and start their parasitic life stage living off of the fishes bodily fluids. After that, the larvae drop off from the fishes bodies, fall to the bottom and become tiny baby mussels about the size of a grain of sand. From there on, they are mussels as we know them, just very tiny versions of them.

Here's a great explanation of the freshwater mussels (in the unionid family) life cycle by the Virginia Tech: https://www.fishwild.vt.edu/mussel/research/life_history.html

Our lampmussels came from broodstock collected in the tidal Potomac River about a year ago, more about them in the next blog post.

back to top
More in this category: « Call For Artists: Storm Drain Murals in Lamond-Riggs Anacostia River Mussel Power: Meet our Lampmussels »
Keep in the Loop
Get the Latest updates on our work delivered to your inbox.
Subscribe Now