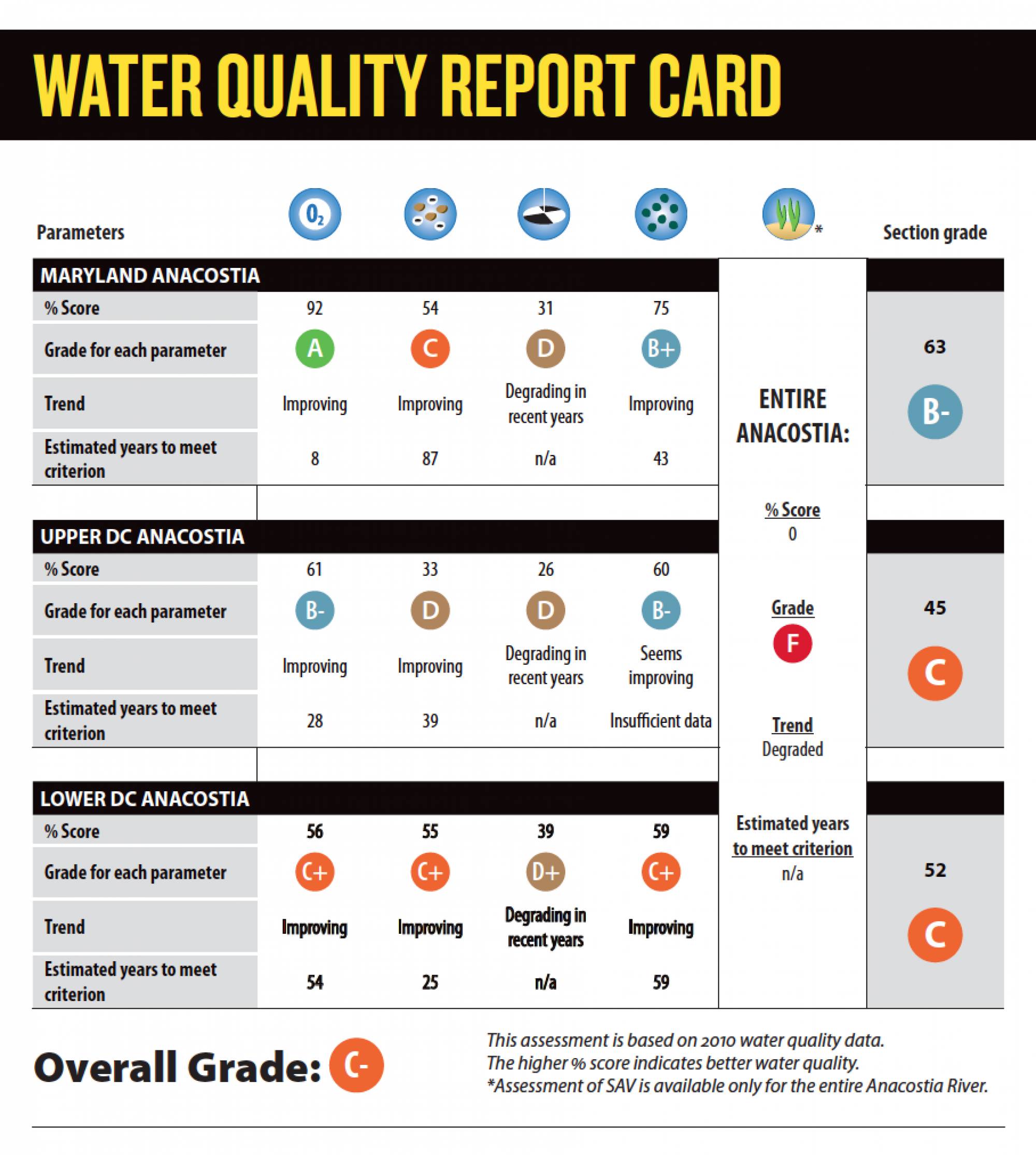 During Earth Month AWS released the second annual State of the Anacostia River report card. The river received an overall water quality score of C- based on the parameters we assessed. But what does that really mean?

The Anacostia River has four pollutants that are preventing us from reaching our goal of a swimmable and fishable river: fecal bacteria, toxics, trash, and stormwater runoff. Of those four, only bacteria and stormwater can be properly assessed with available data. This means two major pollutants -- toxics and trash -- are NOT included in the water quality grade of C-. Unfortunately these two problems are pervasive* and scoring them would surely reduce the river’s overall grade.

The water quality parameters scored are Fecal Bacteria, Dissolved Oxygen (DO), Water Clarity, Chlorophyll (a) and Submerged Aquatic Vegetation (SAV). None of the parameters would have met legal water quality standards. The scoring system asseses how badly various parameters failed.

Stormwater pollutes the river when rain lands on roads, parking lots, and roofs and carries dirt, trash, and chemicals from those surfaces directly into our waterways, affecting all scored parameters. Excess nutrients carried into the river impact Chlorophyll (a) directly via increased algae biomass that in turn consumes oxygen when it dies and decays, lowering Dissolved Oxygen levels. Stormwater flows also carry sediments into the river that cloud the water, reducing Water Clarity and preventing the growth of Submerged Aquatic Vegetation.

Fecal Bacteria in the river comes from three primary sources. In Maryland, WSSC sanitary sewer pipes have degraded and broken over time, often due to stormwater-related erosion undermining pipes. WSSC is working diligently to address this problem under a consent decree with AWS and other parties. Also in Maryland, stormwater runoff carries fecal bacteria from animal waste into the river. (Please clean up after your dog!) Finally, in DC, the outdated combined sewer infrastructure discharges untreated sewage to the Anacostia River in rainy weather. This problem is scheduled to be addressed by 2018 when a $2 billion engineering fix comes online -- an 8-mile-long overflow tunnel under the river to capture and store the untreated combined sewer discharge.

Data trends show that Dissolved Oxygen, Fecal Bacteria, and Chlorophyll (a) are all improving, albeit slowly. This is proof that the efforts made to restore the Anacostia are having a positive effect. Unfortunately, Water Clarity and Submerged Aquatic Vegetation are going in the wrong direction. Stormwater runoff is increasing as more and more development comes to the Anacostia watershed, resulting in greater erosion and sedimentation. To reach a fishable and swimmable Anacostia River we need widespread implementation of green infrastructure techniques to prevent polluted stormwater from ever reaching the Anacostia and its creeks.

* Trash: The trash problem is so severe that the Anacostia was declared impaired by trash under the Clean Water Act. The river’s jurisdictions have agreed to a TMDL or “pollution diet” that requires them to remove a certain amount of trash from the river every year.

Toxics: There are six known legacy toxic sites along the Anacostia river, mainly former industrial uses. (See the map in the image gallery below.) There are also toxic “hotspots” in the river’s sediments that may or may not be related to the known legacy sites. Collecting and assessing toxic samples is cost prohibitive for a non-profit like AWS and even government sources struggle to fund the needed lab work, resulting in inadequate data. 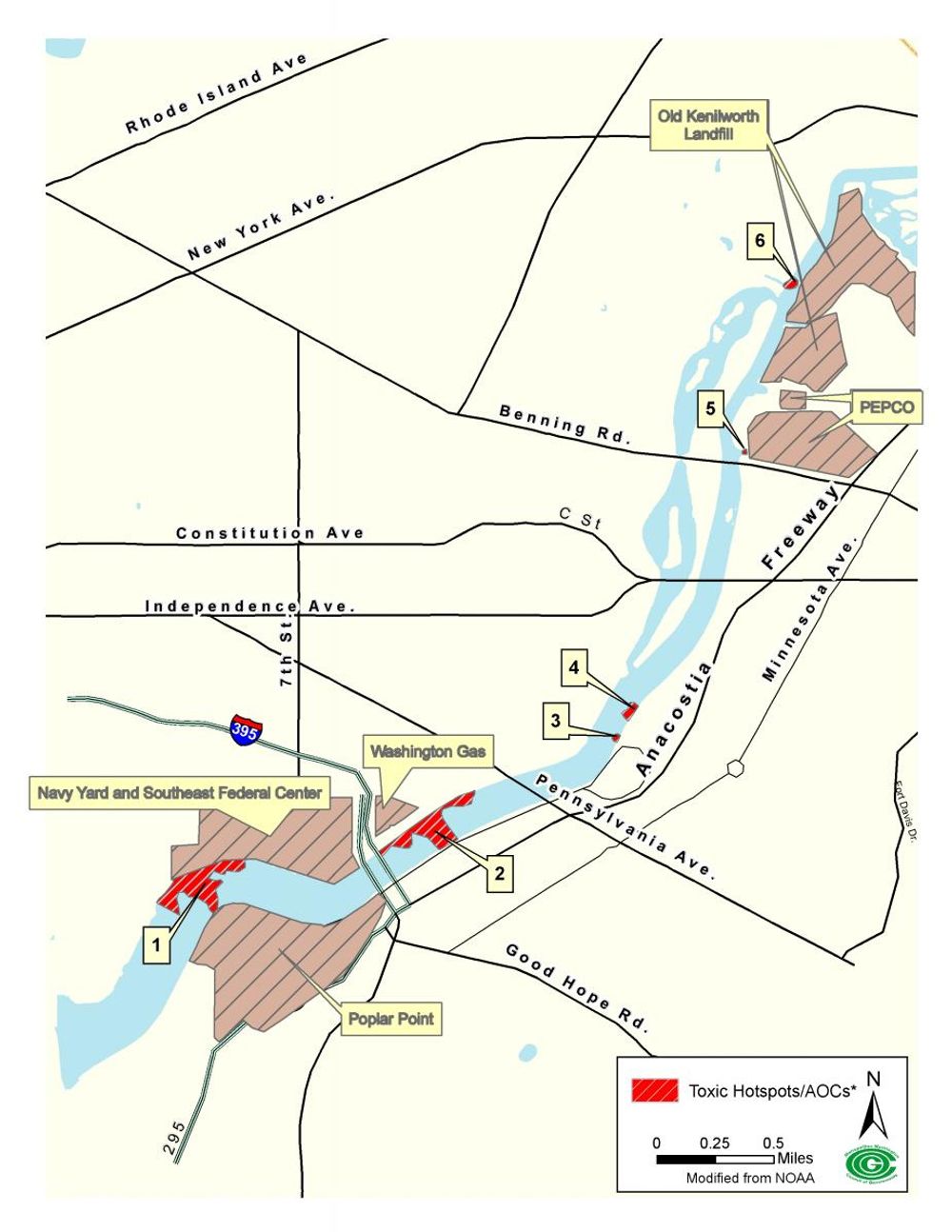 View the embedded image gallery online at:
https://www.anacostiaws.org/blog/news-blog-understanding-anacostia-water-quality-report-card.html#sigProId16c5d0387b
Published in: Anacostia Watershed Society Blog
Tagged under:
back to top
More in this category: « Native Shrubs Help Restore Habitat Calling All Artists! »
Keep in the Loop
Get the Latest updates on our work delivered to your inbox.
Subscribe Now